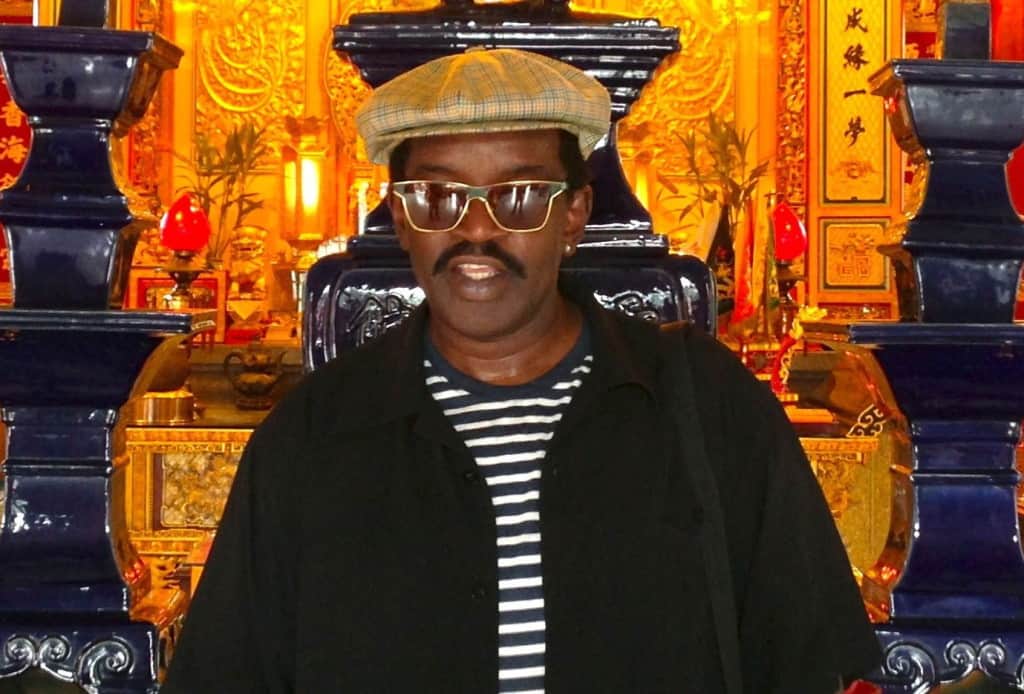 “In those days doors were closed and I needed to get in; we were coming in through the skylight, tunnel in and blowing holes in walls, all metaphorically speaking of course.” Fab 5 Freddy

Born to jazz-loving parents in Brooklyn N.Y., Fab’s introduction to pop culture came courtesy of a name check on Blondie’s 80’s hit, “Rapture”. Fab 5 Freddy is best known for one line: “Everybody’s fly.”  That phrase became Fab’s calling card. Fab 5 first hit the scene in the 70s, when he was among the first to exhibit his graffiti paintings internationally.  Along with contemporaries like Keith Haring, Jean-Michel Basquiat, and others, Fab 5 was pivotal in getting the art world to take notice of the spray-painted words and images which were spawning a global movement, made legitimate with the name “street art.”

We caught up with Fab 5 Freddy during a recent trip to London, where he hosted DJ Spinna’s, (SoulSlam), Prince & Michael Jackson Party in the basement of The London Edition hotel.

THC: What inspires you and why?
Fab 5 Freddy: The fact that I’m alive, there’s work to be done and it ain’t finished. Creating really, I guess, I’m a serial creative, a filmmaker, painter and instigator. I’m very inspired right now; I’m here in London for the first time since 1999; I’ve connected and reconnected with so many great people in just a few days. Just last night I had dinner at Jazzie B’s house; we’ve got  real history together. I‘ve been a huge fan of his since the beginning. I heard his Soul II Soul record: “Keep on Moving” a few months before it was officially released in America like in 1988. I just knew something really interesting was about to happen. It was probably the last black/British situation that just took over the world. It had an indelible impact on America and it coincided with me about to start hosting MTV Raps. It was such an invigorating time, seeing black artists redefining music and culture in a way that there was no precedent for. We spent six hours with each other yesterday; he came round to the hotel to pick me up and took me around his neighbourhood; he showed me the statue they erected of him, such a very cool looking statue at that, I came over to interview him for a SPIN magazine cover story in 1990 and he asked me if I wanted to get on the microphone. I’m no rapper, but I had a few raps. The track was called, ‘Our Time has Come’, I rapped “lay your cards on the table and place your bet, I lay your odds this is something that you haven’t heard yet. It’s fine divine like vintage wine, best of all yes y’all its genuine, its the sound of Soul II Soul.” It ended up as an intro to the song, “Our Time Has Come” on his the second album. It started the record, which was very cool.

THC: How did you get into your business?
Fab 5 Freddy: I’ve worked in art, music, television and film. I’ve directed a lot of music videos like Snoop’s first video, “What’s my Name”. I’m the guy that turned him into a real dog on screen. I also directed the first videos for Queen Latifah, Snoop, KRS1 and a lot of others and most of Shabba Ranks videos. I was an associate producer on New Jack City, I also consulted on American Gangster. I have a deep passion for filmmaking. Before all of that, I was a painter, first and foremost. I was one of the first artists that came from having done graffiti on subways that wanted to be a fine artist and exhibit at galleries, museums and the like. They call it Street Art now of course. In the beginning of my history in the game I met Jean-Michel Basquiat and Keith Haring and we all became close. Together, we kicked doors down and made stuff happen along with others like Futura 2000, Lee Quinones and Dondi. Everything starts from there, that’s how the movie Wild Style got made, through collaborating and working in a mish-mash of cultural exchanges. In those days doors were closed and I needed to get in; we were coming in through the skylight, tunnel in blowing holes in walls, all metaphorically speaking of course. I had to strategise and get people who weren’t used to dealing with people like me engaged and interested; it was essential  to get into those creative spaces. We made them look at us, see the work and eventually work with us. Later it created a shift, many things moved around and doors were opened – no question.

THC: What are you working on right now?
Fab 5 Freddy: Five or six years ago I started making works of art again. I’ve been exhibiting. There was block buster exhibit at the Museum of Contemporary Art in Los Angeles 2 years ago called “Art in the Streets”. It was the first comprehensive look at graffiti and street art, which included the entire story of graffiti movement, how people like myself, Keith Haring, Jean-Michel Basquiat and Futura 2000 became painters and exhibited our work. I also love what Banksy and other street artist around the world are doing. I love to see people take things we started and add their own twists to it. With the visual art I’m making one of the series of paintings is called Abstract Remix, where I take randomly photographed graffiti, mainly by other people and I digitally dissect, dismember, twist, reconfigure and then reassemble those elements digitally, akin to the sampling process; then we have them printed and I work more on the surface after. That series of work is inspired by the digital process, by which contemporary music is made and its largely influenced by the production process in hip-hop music. It’s like a conceptual vision. You can see them at fab5freddy.com.

THC: How do you see your space evolving?
Fab 5 Freddy: It’s refreshing and astonishing how a lot of these disciplines have spread across the creative industries and still exist; they’re still being adopted by younger people who are working on these platforms. I could not have said 30 years ago that people would still be leaning so much towards this urban creative direction, but what’s most interesting for me, how these things are being adopted and made a part of people’s cultures in other parts of the world. As an example, there’s 53 countries in Africa, and almost in every one of the those countries there’s some form of hip-hop culture and when it comes to the musical aspects, its typically people using it as a voice they’ve never had to express their realities and their wants and needs. It’s not the flossy, bragadociousness that has dominated so much of what American rap music ultimately became. The US state department sponsored a few African rappers to come to New York a year or two ago and I had lunch with them. They all got up and spoke and said where they were from and shared what they were doing. There was this one brother who got up; he was from Senegal; he talked about a recent rapper that he was close to, had made a rap song about the person running for re-election, President or Prime Minister, and the rap record exposed him as a person people didn’t want. The record became a sensation and he didn’t get re-elected. I was speechless; these are the most rewarding and satisfying things.  I’ve done a lot of work with people in hip-hop in Brazil; they have the second largest population of people of African descent outside of Nigeria, and the way hip-hop culture played a part there giving those people a voice…they didn’t have things that we had in America; black power struggles, civil rights all these movements that changed us and led to us having a black President. The previous President of Brazil, Lula, sat down with leading rappers during his campaign, to make sure they were on the same page.

THC: Who’s your hero or icon?
Fab 5 Freddy: A long legacy of people, in so many creative genres. I’d say James Brown, Louis Armstrong, Duke Ellington, Kanye West, Frank Stella, Carravagio, Warhol and generally people that have broken ground, gone where no one has gone before, with a unique sense of creative consciousness. I read this book called The Black Count, about Alexander Dumas, the greatest general during the French revolution under Napoleon and father of the great writer Alexander Dumas. It’s the best book I have read in years. It’s about a black man who led 50,000 troops across Europe and was undefeated. What led to his demise was that he bumped heads with Napoleon during their insurgence into Egypt. His stories are the basis for The Count of Monte Cristo and The Three Musketeers as a way for his son to keep his legacy alive after Napoleaon tried to erase his history and reinstated slavery and discrimination in France. His sword game was like Michael Jordan played basketball and he was a fearless leader, he rapidly rose through the military and was loved fiercely by all who fought under him. Sad how few know of this great hero.

THC: What’s your favourite spot around the world?
Fab 5 Freddy: I’d say Jamaica for the cultural enrichment. I’d go to do the chill out thing and the cultural music thing. I could be happy from one end of the island to the other.

THC: What’s your favourite injection of culture into a brand?
Fab 5 Freddy: I would have to say the Beats Audio phenomenon, probably the most synergised collaboration of its type. It started as a marketing thing if you will, with Dr Dre and his great legacy of making great beats and producing great artists, then his headphones became a ubiquitous fashion statement. Beats asked me to come out to LA  last Grammy weekend and help them launch Beats Music.  It was an amazing idea of a 90’s hip hop playlist coming to life on stage featuring Busta Rhymes, Souls of Mischief, The Pharcyde, Ice Cube, Cypress Hill, Blackstreet, Puffy and Mace, Dr Dre and Eminem. It went on and on. They all came out and did one song. Then a few months later the billion dollar Beats/ Apple purchase  was announced; that’s the best cultural brand connection. If you think about what Apple has done and how, they‘ve changed the game on how we get our music, because the download is now a part of our lives, I actually had to show my now 18-year old daughter what a record player was and explain how it worked back when she was about 12 explaining the grooves on the record and how a needle goes in to pick up the sounds, it was crazy.