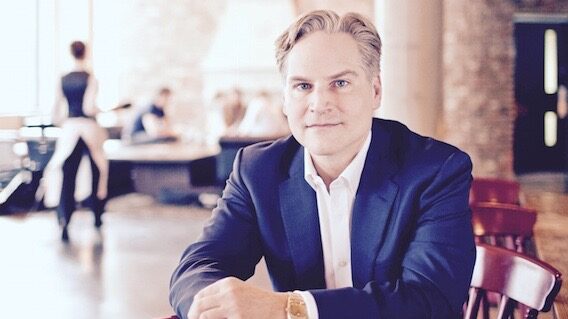 “I don’t think you can inject culture into a ‘brand’. Either you are and have something authentic in yourself and your product – or you are simply trying to fake it.” Kurt

Kurt R. Bredenbeck is the founder, creator and former owner of The Hoxton Hotel. He is currently the Chairman of Green Rooms, the UK’s first social enterprise hotel for the Arts.

KRB: Beauty, especially as Hogarth called it ‘the line of beauty’ that we can create in a space or place that people can experience and enjoy. There is an indefinable feeling and value to being in a room or building or space that holds that line of beauty. It’s interesting that as more hotels – big and small – focus on ‘design’, I see only more quantity of ‘design’, but little evidence of real style or beauty. I am also now looking at the concept of a ‘beautiful business’, something that no one is really talking about yet. What would it mean to have a ‘beautiful’ business or enterprise?

KRB: As a student in America, I witnessed the rise of Ian Schrager and his reinvention of the hotel (and also of course the reinvention of himself from former Studio 54 disco-guy and convicted felon into trendy hotel mogul). In the early 1990’s I thought this new re-invention of the hotel was a great idea, and unseen at the time in London. I tried to get Schrager to come from New York to set up a hotel with me. Instead, I started working with a small British hotelier and we started the One Aldwych project – London’s first new contemporary hotel.

KRB: I am obsessed with social enterprise – and the new generation of entrepreneurs who are believers in creating a better world of business that incorporates new and different values from their elders. I am currently Chairman of Green Rooms, which is the UK’s first independent social enterprise hotel. Working in partnership with the Mayor of London and our local council, we are building a hotel that promotes inexpensive, authentic accommodation in a creative environment for visiting artists and performers. My next hotel project is The Road – also a social enterprise – that will incorporate a hotel training programme for formerly homeless individuals into a next-generation super-budget Anti-Travelodge hotel.

KRB: It’s basically David & Goliath. The hotel space is increasingly dividing into the 95% majority that is controlled by a handful of huge monopolistic corporations – then the 5% of the hotel world that is born from truly creative and independent entrepreneurs.

KRB: It may be deeply unfashionable to say this, especially in America, but I think President Obama is a rather heroic figure. In my generation growing up in America, we were all brought up and trained for one objective – Ivy League, MBA or Law Degree and then a job with a big investment bank or consulting firm. He is virtually the only man I know of my age who took a different path – one toward community service and later public service.   Everyone talks about community now, but he was there 30 years ago in the South Side of Chicago working in the local community while I was sitting a few blocks away doing my prestigious MBA course in corporate finance.

KRB: My colonial modern beach house on Sanibel Island in South Florida. It’s a simple 1970’s wood structure on stilts opposite the sea with a view of the Everglades and lakes. When I bought it last year I had a container load of antique British colonial and campaign furniture sent out to the island from London. This is the kind of furniture that Georgians, Victorians and Edwardians would have used when they went to the colonies – South Africa, India, Ceylon, and Malaysia – in the military, on diplomatic service or for business. You can see that the pieces have history and patina; they tell a story.

KRB: Intuitively I don’t like this question. I don’t think you can inject culture into a ‘brand’. Either you are and have something authentic in yourself and your product – or you are simply trying to fake it. Almost all the big brands in the industry are faking it, of course. Their original creators and founders are long, long dead and gone, and thousands of employees are carrying the carcass along, trying to inject some life and ‘culture’ into these huge dead brands.