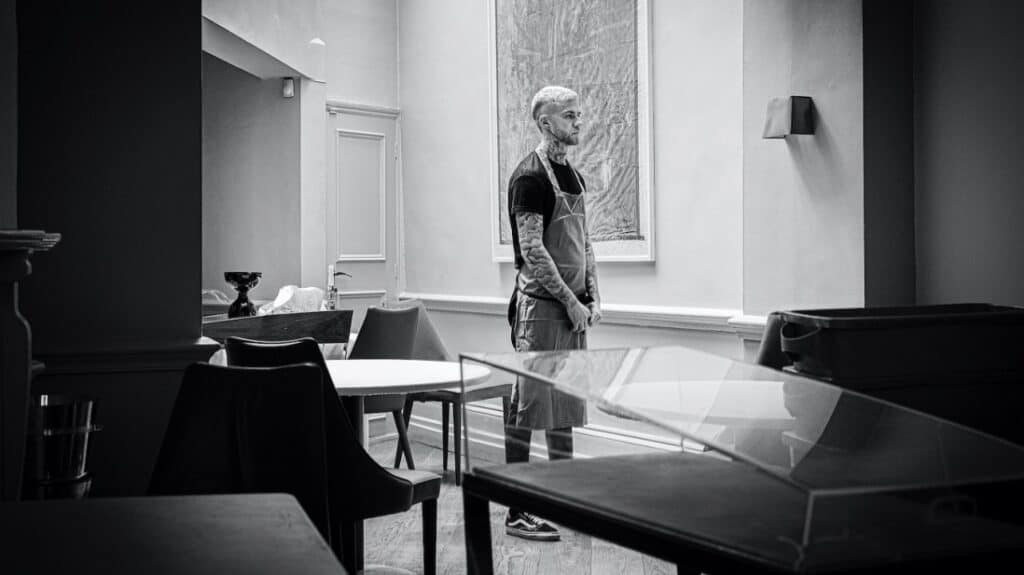 There’s a man, who stood in front of your favourite chefs and asked them to do something they’re simply not used to doing in their restaurants. He asked them to stand still.

Established restaurant, food and portrait photographer John Carey didn’t pick up his camera for two and half months when lockdown was officially announced. “It was a challenging time for everyone, but it seemed to be hitting the restaurant industry, an industry I work in and love, particularly hard”, said Carey in a recent conversation. “Restaurants, chefs and anyone who works in food and drink were told they simply couldn’t do what they live for, have people in their spaces, cook for them, entertain them and perhaps most importantly look after them”. John went on to say that it was a new environment and a new time, “it was something none of us had ever experienced before. I’ve never heard of a complete shutdown of hospitality before. Even during war times pubs were afforded the license to stay open for the ‘morale of the people’, but this was something else”.

It created a lack of familiarity and context, but the slow burn process of life being eventually breathed back into the restaurant sector as discussions of reopening dates and a relaxation of policies increased – led John to picking up his camera once again. “I wanted to get involved and I felt compelled to do something. I called Claude Bosi and Angela Hartnett and asked if I could come and take some shots of what they were doing. They were both kind enough to grant me access as I had heard they were temporarily shifting their focus to home delivery. I took pictures for social media as a way of support, I also wanted to see what was going on in the restaurants, I missed them and I missed photographing the life inside them. I knew I wanted to get back to being creative.”

After the visit to Bosi and Hartnett’s respective restaurants, “An idea started to form based on this notion that chefs are forever on the move, thinking and forming different ideas all the time – but now during the early part of this period they literally were forced to stop”. Carey further explained, “The power of something stopping that’s meant to be perennially moving is evocative of this time we’re in and it needed capturing. I started to reach out to chefs I’ve worked with previously and ones I didn’t know so well, and asked if I could come round and take some shots of them in their empty restaurants. But it was when I took the first portrait photograph of Claude on my first venture into London after nearly three months that I realised that this was more than a recording, it was a story that needed telling.”

The story of “what chefs, restaurants and the wider industry were going through. This odd moment of abandonment, a pandemic responsible for putting these figures in a brand new environment.” During John’s series of session, that would become better known on Instagram as Lockdown Portraits, he also asked chefs for a few single words that best described how they felt, “Loneliness, sadness, uncertainty, isolation, confusion and devastation were perhaps the most commonly expressed. But each of them, whilst feeling the way they felt were present, correct and in their chef whites – ready to work, find solutions and create a way forward. The most powerful thing behind the shots is the trust they have shown in me as a photographer and the willingness to show emotion and a vulnerability to this situation.”  John went on to say, “We’ve stepped off the treadmill, and we’re all reassessing, which I believe will be positive for the hospitality industry, because challenges like this breed creativity.”

But just like the subjects in these portraits, the wider hospitality industry won’t stand still for long either, as we create our own way forward, chef whites and all.