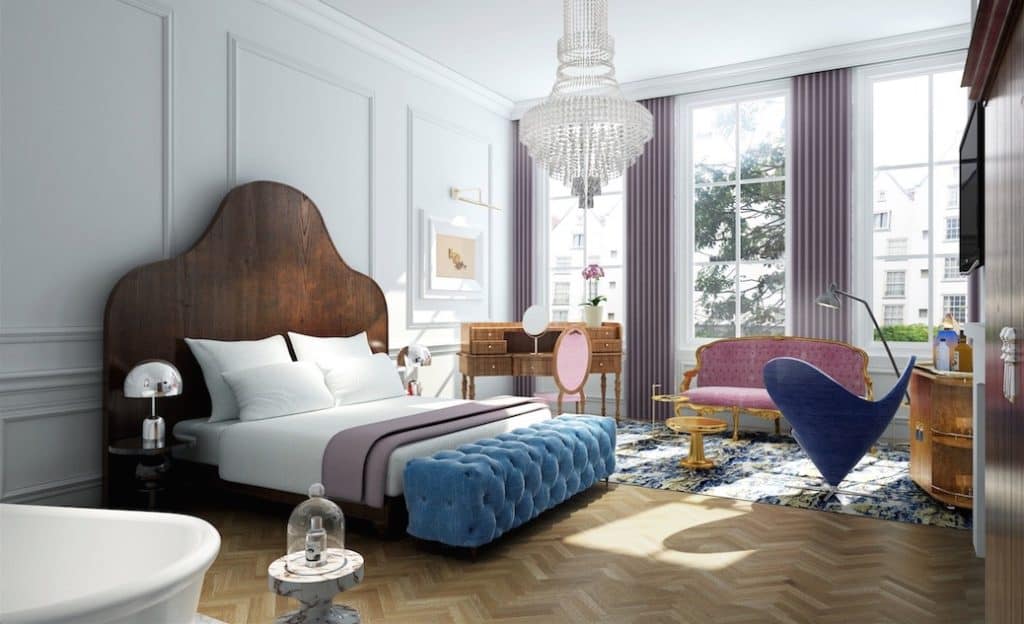 This 45 year-old self-declared ‘urban resort’ in the heart of Amsterdam’s World Heritage Site has undergone major renovations over the past year, and to spectacular effect. Its most referred-to characteristic is its basic architecture – the hotel is actually 25 conjoined narrow townhouses in the quintessential Amsterdam style. With its sublime restaurants, international-class museums, ubiquitous cycling and wildly imaginative boutiques, this most urbane of districts could lay rightful claim to being the pinnacle of contemporary Western civilisation.

The new interior design – and exemplary it admittedly is too – is by Jacu Strauss, the young creative director also responsible for London’s Mondrian. We take our hats off; Strauss has employed traditional local mores in strikingly modern ways. For instance he’s used the colour palette of Holland’s famous seventeenth Century painters – petrol blue, delicate grey and a lavish russet – in glossy, surprisingly sexy, tones. This contrasts with other bourgeois boltholes that really have reached ‘Peak Farrow & Ball’. Old master prints are applied to the upholstery to create seductive interior pieces. Neo-classical sculpture and and the privacy afforded by the hotel’s labyrinthine layout makes for a bewitching visitor experience.

The expansive interior garden is a breathtaking luxury in a city whose real estate prices threaten to outrun London’s. It’s also a splendid consolation for those whose rooms don’t boast a canal view. Further breakout spaces manifest themselves all over the hotel – every nook bears a bookshelf of hardbacks with rather illicit titles, and every surface bears heavyweight art books. But while the interior is especially seductive to the urban bohemian, the guests are comparable to any upper echelon hotel the world over – retired baby boomers and weekending financiers. It’ll be interesting to see how hotels that deal in atmosphere cope with this particular threat to their carefully laid plans in the coming years.

We had to talk ourselves out of 10/10 for both of these ratings. Strauss has created an impeccable ambience, as much urban fantasy as urban resort, using literature, art, and antiquity to stimulate the senses rather than gaudiness and hedonism. One public entranceway, for example, is a semi-restored apothecary’s store. Enjoy drinks on the pavement tables, as you window shop macabre curios and watch the new European elite stroll by, or sip cocktails in the conservatory while leafing through fruity lithographs.

Nine Streets is the chicest neighbourhood in Europe’s most sophisticated city, and a world away from the Red Light District of stag night lore. While Amsterdammers have never been especially seduced by fashion, their antique shops and galleries are incomparable. Equally, and unusually for Europe, from canalside cafés to dive bars it seems that the entire population is out socialising at any one time. Take the Pulitzer’s own boat down the canals for a historical tour, for architecture old and new and the story behind the city’s ‘XXX’ symbol – it’s the very same vessel that Churchill rode in triumph after the city’s liberation in spring 1945.