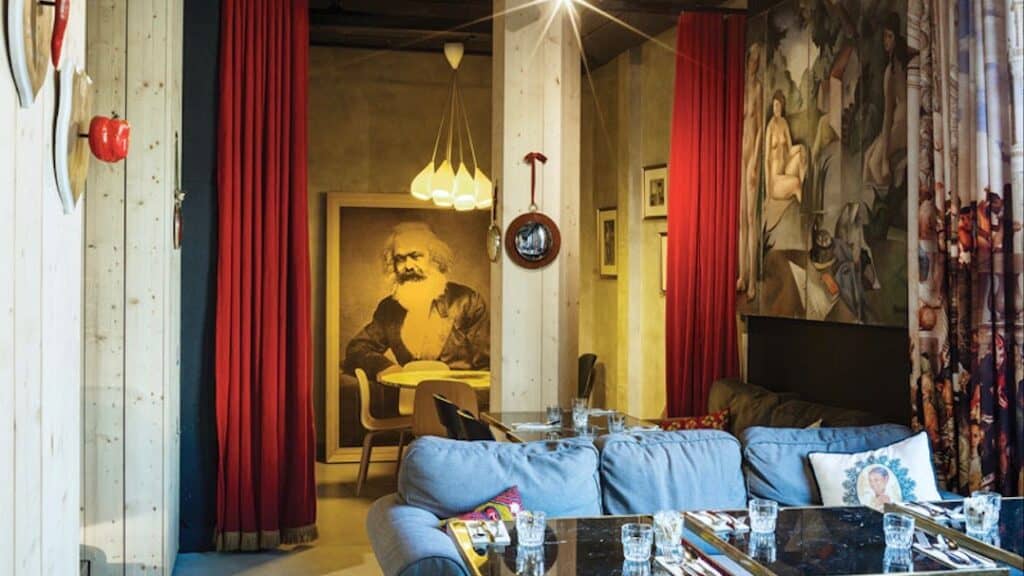 “It’s the same story told over and over. All that the artist can offer the world is how they see those twelve notes”. You could say the latest incarnation of ‘A Star is Born’ was a film that had something to say, and acting veteran Sam Elliot was the man to say it and on the matter of creative license no less. Whatever industry you’re from, it’s easy to draw comparisons when undertaking one form of creative endeavour or another – and with creative expression in hotels these days reaching fever pitch, having something to say can be worth a whole lot more than a business model.

Where this trend started we already know, but where it will go next is the discussion of boardrooms, creative think-tanks and hedge funds the world over. But some folks rightly see things a little differently, and it’s their imaginations, styles, concepts or manner of doing something that we love the most – its why we keep going back to their places over and over again. Ironically this simple thing is what hospitality has always been about – enjoying the way someone does something, and at its most effective – instilling a desire to repeat the experience. Because an experience is always more meaningful when its personal – when you feel that someone, or a place gets you, by reaching you through your cultural dials. Today, there’s a handful of folks in the hotel space who are saying it bigger, louder and in recent years with more meaning – they’ve captured not only our attention, but our imaginations too.

Philosopher turned hotelier turned activist, Cyril Aouizerate is the founder of MOB. Calling MOB a hotel brand would be an abject failure in eloquence because Cyril gets the deeper mechanics of the business of people. Full name ‘MOB of the people’ takes its primary name from ‘Maimonide of Brooklyn’, the one-time vegan hotspot of New York. In a recent interview with Forbes, Aouizerate manages to best describe his brand as a “movement” going on to say “the goal is for MOB to be the Whole Foods Market of hotels”. When asked about the best compliment a guest has paid him, Cyril stated, “This is the first time I’m in a hotel that is what it says it is”. Aouizerate went on to say “I think that is the best of all recognitions. I often see hipster hotels that are almost a marketing caricature of our time… I hate that. They think they are cool, but they are scornful and haught. At MOB I believe that we managed to be a real people’s movement, by the people for the people.” We couldn’t agree more Cyril.

The surfer turned businessman hotelier that gets cultural insight, Sean MacPherson is the owner of The Ludlow, The Jane, The Waverly Inn, The Bowery Hotel, The Marlton and The Maritime Hotel. MacPherson often referred to as the “reluctant mogul” and considering you know the hotels but not his name, you’d have to agree. In an interview with The New York Times MacPherson stated, “I’m very hesitant to talk about cool. But everyone in the business brings their own little gimmick; infusing places with feeling is probably mine”. The effortless manner in which the hotelier creates his own unique scene is something his peers envy. Never one to overcook an idea MacPherson rightly values the most important parts of telling a story, the likeminded and the art of subtlety.

The first to take boutique and design to the big leagues, Barry Sternlicht was the creator of W Hotels and is currently the co-founder, chairman and CEO of Starwood Capital Group. In a recent Robb Report interview Sternlicht stated his position by saying he’s “looking for intellectual humanity”. The creative visionary behind 1 Hotels, The Principal, Baccarat and the soon-to-open Treehouse in London. Sternlicht’s purpose is the detail and he’s a stickler for it, as he continues to address his passions through making great products for the people. In a recent interview with Mind Body Green on the subject of 1 Hotels, Sternlicht stated, “I wanted to capture the beauty of nature in a hotel and in doing so, commit to safeguarding it as best I can, a responsibility that I believe we all share.” A point no one can argue with.