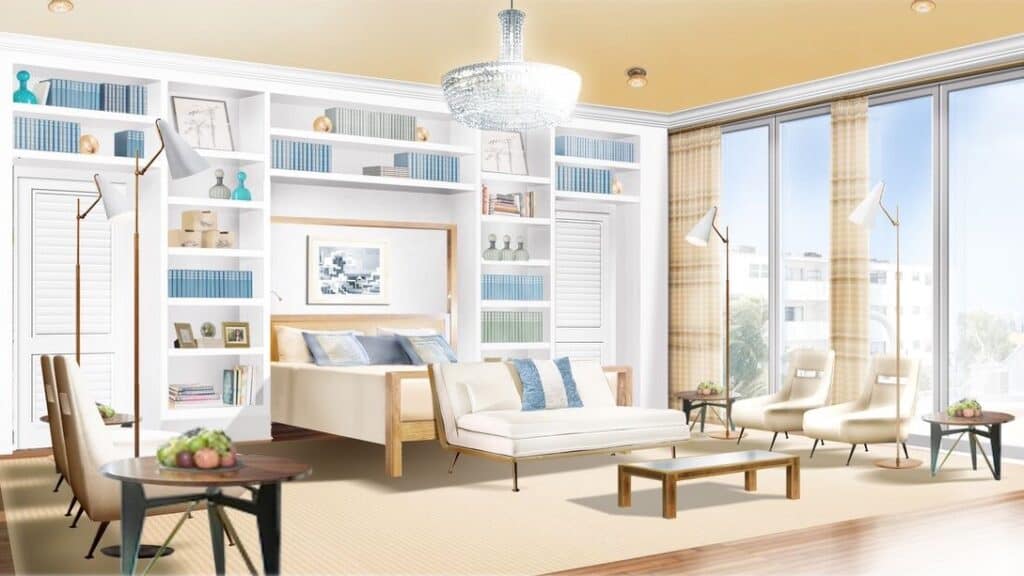 You don’t often think of high culture when you think of Miami’s Ocean Drive. Between Spring Break, Winter Music Conference and that general South Beach scene it is easy to start thinking of Miami as a decadent millennial haven. But six years ago The Betsy Ross Hotel re-opened simply as The Betsy and owner Jonathan Plutzik presented Miami with the antidote to all of that, and it is about to get bigger.

Named after Betsy Ross herself, the lady who created the first American flag in 1776, the hotel illustrates the distinct artisan tribes of Miami, showing its more soulful and authentic side. A distinguished landmark hotel on Ocean Drive, it certainly has a storied life. The independently owned, one of a kind 61 bedroom hotel is the lone surviving example of “Florida Georgian” architecture designed by L. Murray Dixon in South Florida. And so like with any story worth telling, we’re always waiting for the next chapter. The Ocean Drive hotel is extending beyond its current “Colonial Wing” and they have acquired The Carlton Hotel on Collins Avenue to create the newly named “The Art Deco Wing”, scheduled for completion in this November.

The hotel is collaborating with the original designers Diamante Pedersoli and Carmelina Santoro, who created the now trademark tropical colonial style, obtained by their clever use of mocha coloured wooden style shutters as dividing walls, separating the hotel lobby salon and guest reception areas from the restaurant. But what we loved the most about the hotel was it’s sense of timelessness, the design could be retro in the 70s and retro 00s simultaneously. It is a rare delight to happen upon a hotel that affords zeitgeist and throwback all in one.

The Betsy calls itself “passionately low-key”, while the New York Times refers to it as “the intelligent hotel”, and they’re both right, but walking around you can’t help but think that Old Sport himself Jay Gatsby would have been happy here. Sean Connery and Grace Kelly themselves also probably kept the bar up from time to time – who knows. It has an old Hollywood charm, but yet it doesn’t pander to it. From the magnanimous Jack Nicholson to the elegant Audrey Hepburn and even more current cultural references would, we’re sure, have been enamoured by The Betsy, her grace and her poise. You can’t help but feel personality and provenance within every inch of the hotel, from the flooring, to the tropical plants, the bar and the staff. The building effortlessly oozes the kind of charm and wit you hope will always be present when you’re away from the unfamiliar. It isn’t that its one thing in particular, it is the chemical equation of how art, design, culture, history, community, food and drink all conspire with one another to create sweet solace for both the traveller and the neighbour.

But all that notwithstanding, perhaps the star of the show is The Betsy’s moral compass. Engaged in a number of social causes and activities around town at any one point The Betsy offers you a sense that they fight a true and meaningful cause, one that no one has asked them to undertake but will continue to do so for years to come, because their passion for all they do is simply infectious. Their creative programming champions the power of community by cultivating the sights and sounds of art, music and literature. It includes everything from “poetry readings, jazz, opera and piano performances, exiled writers in residence to a New York Times best-selling author, literary salons, Writers for Young Readers.”

This cautious balanced programme inspires community-led collaborations, giving a voice and platform for the under represented artisan communities, all the while illustrating that the hotel is as much for the neighbours as it is the travellers. The Betsy have also taken it upon themselves to help clean up the back streets of Miami, by creating a stunning suspended silver sphere that will sit between The Betsy of today and its next chapter. While internally this will look akin to a hotel corridor, externally, it will set an aesthetic tone for the street and streets beyond.

Well ol’ Betsy, we’ve enjoyed the story so far, so we wait with baited breath to see just what unfolds in the next chapter.