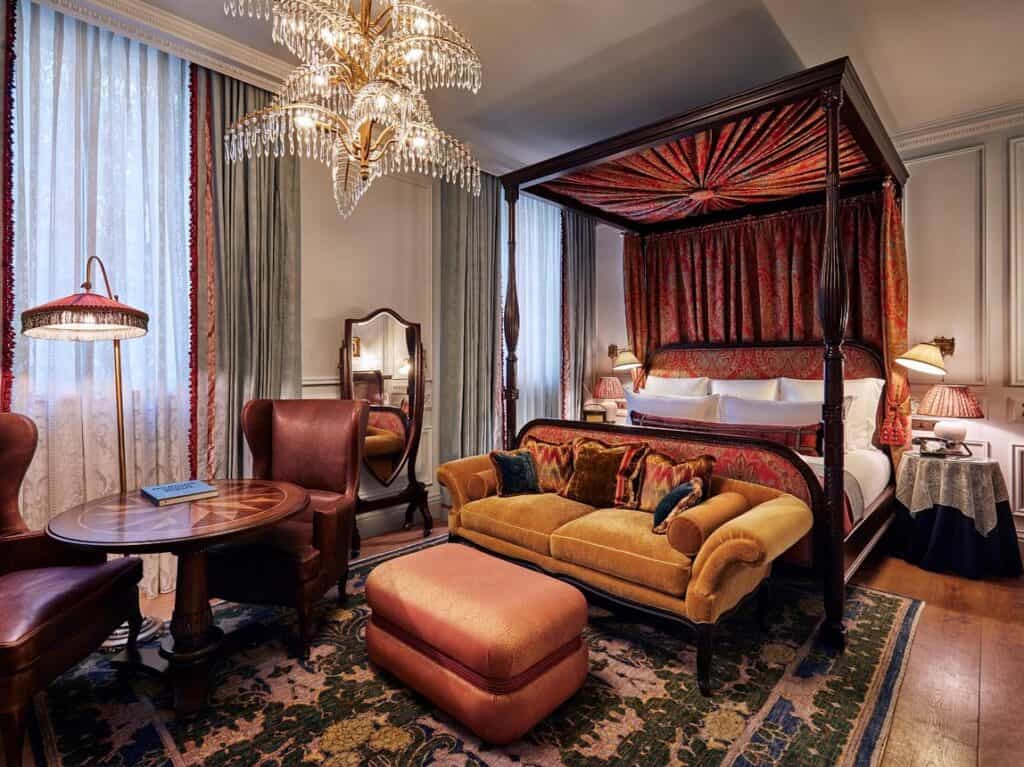 Being the super-hot lovechild of Soho House and Sydell Group and the only place to stay in the financial district (that has 10 restaurants on the ground floor). The Ned is also well known for being housed in an old Sir Edwin (Ned) Lutyens building that for much of its life served as Midland Bank. Eventually closing the building lay empty for a eight years, until Andrew Zobler and Nick Jones rolled the dice on it.

Its respective contributors are responsible for some of the best places to eat, sleep and drink around the world. And here you will do nothing if not eat, sleep and drink your way around the building, because there are (deep breath) 250 bedrooms, 10 restaurants, six private event spaces, spa, gym and… yes you guessed it, a member’s club. The place is rich on detail, which you’d imagine with all that heritage, so you can’t help but get a little drunk on the stories that may or may not have taken place throughout the sprawling building. But with Cecconi’s, Cowshed, Malibu Kitchen, Zobler’s Deli, The Nickel Bar and other food and drink outlets, The Ned is an unstoppable force of imagination and a triumph in how to deal with buildings with grandeur in both a modern and elegant manner. Suffice to say the bedrooms are each stunning, sumptuous and offer a mix of trademark Soho House finishings along with a hint of Nomad (Sydell Group) – blending old world fittings with modern world needs, which both brands are so fond of doing.

They say a place is known by its visitors, but in this instance The Ned is known for being The Ned. So yes, at different times of the week you’ll see different types of folks, but that’s kind of what the hotel business is about – people mixing with people. And that is The Ned’s greatest achievement – bring everything together – each and all of the individual components that make up its well earned reputation from development to delivery. And that reflects in the guest experience – the central stage area hosts known and lesser known talent – but its true purpose in connecting all the different areas brings a uniform atmosphere while folks are having very different experiences at the different places.

An ambitious place, The Ned attracts crowds who expect it and crowds who are wow’ed by it. Facilities and product wise it has everything, and if you’ve ever wondered what Four Seasons would look like if Nick Jones did it, it’s here in London.

There’s not much outside the hotel of any true cultural value, after all the financial district isn’t known for its high-brow cultural interest. That said, what you have here in The Ned, is a reason to never leave The Ned. A point I think, that Sir Lutyens would have certainly agreed with.

Image courtesy of The Ned