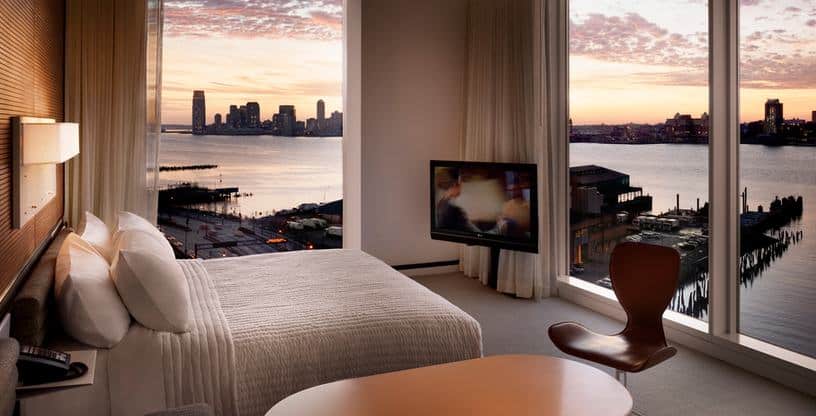 Best Known For
The Standard Hotel, is on Washington Street, perched at the end of the High Line in New York, right in the hub of the Meatpacking District, this district was transformed a few years ago with thanks to brands such as The Standard, Grupo Habita’s Hotel Americano, DVF and her killer design HQ, & of course Soho House has it’s steady stream of SUV’s dropping off members & guests alike. The Ganservort rocks up, Marni arrives down the road, and all of a sudden you have the powerhouse design district that is The Meatpacking District.

The Good Stuff
I was instantly grinning the moment I left my taxi, an ice-skating rink right in-front of my hotel?! Just amazing. I was whisked straight up to my room, and for anyone who’s stayed before, that moment of walking into your room, floor to ceiling windows, gorgeous sunshine gleaming into your room, you can do nothing but smile. The Standard can boast all they want with views like this. Regardless of which side of the hotel you are staying on, you either have views of the High Line, or overlooking The Hudson River. With 338 rooms over 18 floors which is already elevated way above the roads below via two enormous concrete pillars holding it nearly 18 metres off the ground. The Standard offers unparalleled views of the surrounding area and those glass windows have shared some naughty secrets. If money was no question, you would have found me in their Liberty Suite, a 575 Sq Ft suite with a seven-foot round platform bed, teacup bath by the window, huge walk-in shower and incredible views of both Downtown Manhattan and the Hudson River. The layout of my Standard Queen had been executed perfectly, a hydraulic dining table that lowers to a coffee table, & wall mounted upholstered bolsters so you can use your bed as a sofa. Think 300 thread-count linen, giant bathrobes, wall to wall & floor to ceiling windows, iPod ready sound systems, and a killer mini bar. They proudly boast that they’re overstocked. They really are, anything you want, it’s probably there.

The Vibe
I headed straight back downstairs and worked my way back up the hotel until I reached the bar named The Top of the Standard, in time for sunset. First stop, the wonderful Standard Grill. A classic neighbourhood staple, with all the diner food you might want. The front café, bar and street side bistro is light and airy, tiled floors, eggshell walls, with a fresh oyster bar, and the biggest club sandwiches in the city. The main dining room where you’re ushered to for breakfast is more cosy, old-world style, & a floor paved in copper pennies. Think steak house style, deep red leather booths & linen table cloths in the evenings, it was heaving with media moguls the night I walked through.

Inside the hotel – 9/10
I’m used to hotel rooms in New York to be compact, and really this Queen option was just fine. There are so many other areas of the hotel to enjoy, I’m not one for staying in my room. The giant rectangle swimming pool of a bath makes up for everything though, honestly you could bath an entire family in that tub. The hotel was designed by Roman & Williams (initially) with the additional attention of Shawn Hausman. Robin Standefer & Stephen Alesch were also appointed on this project before moving on to open Roman & Williams. So a serious powerhouse of designers set to work creating this hotspot.

Outside the hotel – 10/10
Located within the Meatpacking District, formerly a butchers precinct, now a hipster magnet, galleries and design studios have been popping up at a consistent enough rate to know that this area is where I choose to stay when I’m in town.

Image courtesy of The Standard

Since inception some six years ago we have rarely mentioned the matter of hotel rates. Because we believe there’s more to the modern day hotel experience. But during these times of hardship...

The world, one could argue, is made up of a series of neighbourhoods and punctuating these neighbourhoods is a mix of independently run and chain operated hotels. Each and all bound by hospitality,...