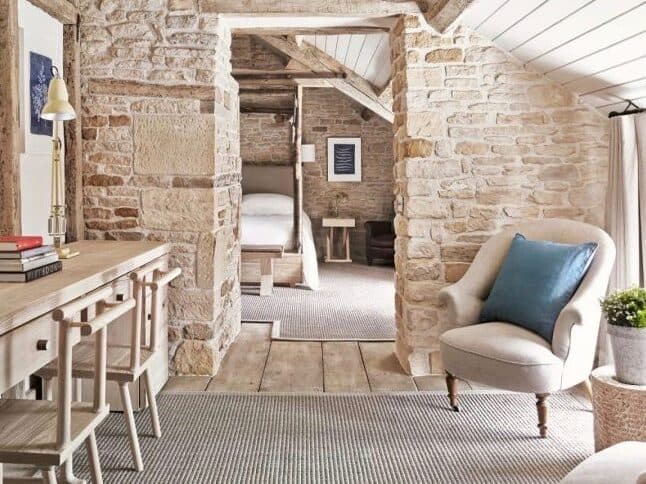 You know The Wild Rabbit for at least one of three reasons. 1. Being a part of the achingly cool farm, farmshop, butcher-come-restaurant and all-round legendary Daylesford. 2. Being one of the best ‘pub with rooms’ spots on the planet or 3. Because your friends have told you that you have to go. Not one of those reasons is a bad one, and that is something to ponder.

Set on a one-time farm in Kingham in Oxfordshire, The Wild Rabbit takes its name from the farm’s original name – Conygree Farm, an Anglo-Saxon term meaning rabbit enclosure. But what this place does best is help you forget it all and rest easy knowing the world is still out there, but its better in Kingham. In 2013 the team behind stripped back all the layers so they could get to the bones of the building and boy did they find some wonders. The bar and restaurant create the feeling of a place so great, you’ll want t wake up there. Upstairs the 15 bedrooms are stripped back and allow for a lot of natural beauty and floods of daylight. An army of craftsmen worked on the 18th Century inn, using skills from the old world, and they haven’t disappointed. Effortlessly achieving a considered country chic you’ll find birch, timbers, drystone, linens and some shaker flashes throughout the bedrooms.

While it attracts a cool crowd don’t be surprised to see some pomp and ceremony walking through the doors – and in some way, that’s a good thing. This small pub with rooms in Kingham has made a very big noise and it is well-deserved because it is a lovely, well thought through and considered experience. Think open fires, embers and a Josper grill – yes, they had us at Josper.

The bar and restaurant are stunning and give you a real sense of how special the place is. The outdoor terrace is a delight for the night sky and yes on a less glamorous note, there’s lots of parking spaces.

The surrounding neighbourhood is what you’d expect in Oxfordshire, but staying at The Wild Rabbit means you’ll likely try and shoehorn in some additional meal times, just so you can eat everything on the menu.

Image courtesy of The Wild Rabbit